skip to main | skip to sidebar

Marilynne Robinson tries her hand at taking on 'new atheism' 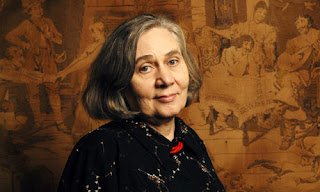 Marilynne Robinson - 'the world's best prose writer', according to some geezer

I'm failing in my course, and would much much rather focus on my favourite topics, so I will. The above quote comes from the common sense atheism blog, and I love it.
I was somehow directed recently to this set of talks, hosted at the website of the RSA [the Royal Society for the encouragement of the Arts], and co-produced by New Humanist magazine. I want to respond to the speakers, Marilynne Robinson, Jonathan Ree and Roger Scruton, whose collective take on the soi-disant new atheists struck me as very limited and straw-personish. I should hope that New Humanist encourages other voices than these - and I'm sure they do.
The first speaker, Robinson, is a US novelist and essayist, and a committed Christian. She starts out very badly by making the claim that 'new atheists' are generally committed to a kind of post-enlightenment 'science is on the verge of explaining everything' view of the world. She doesn't provide any evidence for this claim. I'm not sure I've heard this one before, though I've heard much criticism of new atheism in terms of scientism and scientific triumphalism. This criticism is often levelled at Richard Dawkins in particular, and maybe there's something in this, but I've read quite a bit of Dawkins's work specifically on science, and he has often commented on the way science raises more questions, opening up ever-new fields of enquiry in a never-ending project. The more we do science the more we find things that are in need of explaining, and there's doesn't seem to be any end in sight. So Dawkins, the favourite whipping-boy of the critics of 'new atheism', takes a view of science which is precisely the opposite of the one Robinson seeks to criticize. I can't think of a single prominent modern atheist - and they're a very diverse bunch - who takes this 'everything's almost explained' view. Names and evidence are required.
After pointing out how 'fantastical' [at least she didn't say miraculous] are the findings of modern science, and arguing, or rather boldly stating, that new atheists don't appreciate this, Robinson goes on to talk about William James, obviously an important philosopher, but talked up here as the American philosopher of the nineteenth and early twentieth centuries. Her presentation of James's 'democracy of ontology', in which, according to James, we concede the mystery of everything that we encounter, sounds rather relativistic. Science, as one commentator to this discussion points out, just cannot proceed this way. Here is his comment:


In the light of the data, we look how plausible each proposed theory/model is (using probability calculus). Redundant statements (i.e. that don't add up to the explanation of the facts) are discarded, and experiments are devised with maximal information value in it (testing limits, or rival hypotheses).

I'm not sure of the detail in this comment, but surely the point is that we have to be much much more hard-nosed in sorting out what we allow in and what we discard from an 'ontology' or a theory in order to produce reliable knowledge. And science is all about the production of reliable knowledge. Quantum theory may be 'fantastical', but more importantly, it is reliable, or it would have been discarded long ago.
Robinson speaks favourably of James's contention that you can reject a particular 'cosmology' because it offends your moral sense - another example of relativism, and Robinson's choice of the word 'cosmology' seems arbitrary here. Why not 'scientific theory'? After all, hasn't the theory of natural selection - along with every other evolutionary theory - been rejected on just those grounds by creationists? And it was largely due to this kind of rejection that 'new atheism' has grown up and come out fighting. No modern scientist and no modern philosopher of science would accept moral feelings or moral qualms as a reasonable basis for rejecting any scientific theory or 'cosmology'. The data has to be respected. And democracy is no basis for accepting or rejecting a theory. If James ever seriously put this forward, then, however pleasant and open it might sound, his philosophy of science is impossibly naive and completely unworkable.
Robinson next goes on to claim that 'new atheism', which she seems to understand as something monolithic, has ignored the issue of human consciousness and human brilliance. Again, Robinson tells us what new atheists think, or don't think, rather than showing us. And again I would counter that new atheists are a very diverse bunch. One of that bunch, Daniel Dennett, is a philosopher who has spent most of his career analysing and probing the nature of consciousness, human and non-human. I'm not sure what Robinson is trying to say, in fact, with this observation. It seems to be something about the specialness of humans, a felt specialness which is at the heart of much religious thinking, with supernatural beings generally being obsessed with the detail of human lives - they know every hair on our heads - thus enhancing our specialness to ourselves. Scientists in general seems unimpressed with this specialness, not because of obtuseness, but because they find 'specialness' - or complexity, extraordinariness, unpredictability [but also regularity] - everywhere, whether they're studying cephalopods, hadrons or plate tectonics. I do think, of course, that human consciousness is amazing, and that our achievement in discovering laws that seem to comprehend the formation and activity of our universe, the formation of complex living entities from much more simple [but in their way still incredibly complex] life forms, and which have enabled us to colonise and dominate the biosphere so effectively, all of this is a wonder. It just doesn't make me think in religious terms - let alone in Christian ones.
So much for Marilynne Robinson's brief and, IMHO, unconvincing contribution to the future of 'new atheism'. I'll deal with the other two next time.
Posted by Stewart, aka Luigi at 2:23 PM

Stewart, aka Luigi
sometimes a teacher, sometimes a writer, always a skeptic.